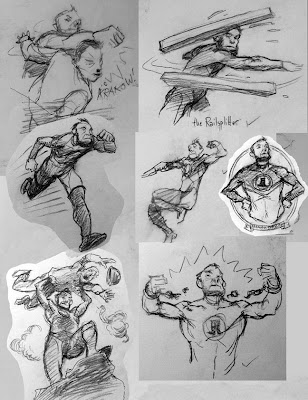 I just noticed I didn't draw him wearing his mask in any of these. That's weird.
at 11:34 AM 3 comments: 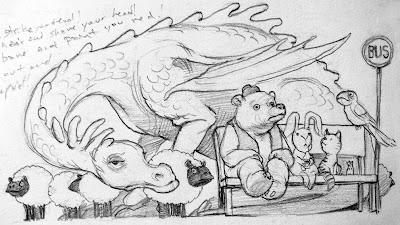 I recently completed a picture book that ended up requiring a lot of sketches and ideas that were never used. This picture of a bus stop is one of them. The rabbit has an iPod.
at 11:46 AM 4 comments:

Haven't posted anything in a while. And my regular morning webcrawl tells me that today is Ada Lovelace Day–as Cory Doctorow put it, "the day that bloggers all over the world post about women in science as part of a global day of awareness and appreciation for the (often underreported) role that women play in the sciences." I love women in science (or at least one particular woman in science), and I'm a huge fan of awareness, so I'm blogging about my wife, Marie.
As I've mentioned elsewhere, she's an astrophysicist.  That's her, second from the left, in a photo by Gaelen Marsden, who I realize may not appreciate me stealing his content like this.  Let me know, Gaelen.  Anyway, Marie is here depicted in Antarctica in 2006, where she and her team built a telescope and launched it on a balloon to the edge of space to search the infrared spectrum for signs of star formation in the early universe.  She was there for two months.  Why yes, as a matter of fact she is cooler than your wife.  That's nice of you to mention it.
at 12:35 PM 8 comments: 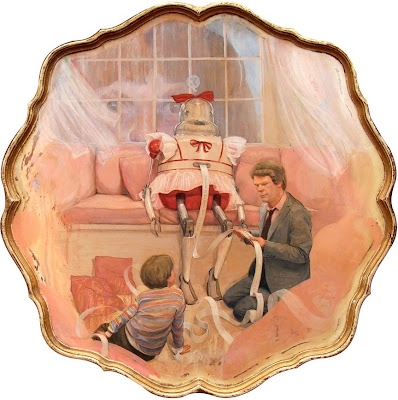 I think it's actually finished now. I have only to package it up somehow and get it off to LA for the Idiot Box show in April.
at 11:08 PM 15 comments:

I'm going home to Tucson this weekend for the first annual Tucson Festival of Books, to be held on the campus of my alma mater, the University of Arizona. I'll be giving presentations on Saturday and Sunday, the 14th and 15th. Check out the link above for details, but here's my schedule:

Reading
1pm in the Teen Authors Lounge, wherever that is.

FROM FRANKENSTEIN TO TRUE MEANINGS
10am, Target Stage on the East Mall

Regular readers will know that I don't make a habit of reposting other people's videos and work and other random things I find on the web. I just assume that's not why you come here, and anyway that's what Boing Boing is for, right?

But this really is possibly the best one-minute short I've ever seen.

Max surveyed the lab with flagging interest. The police had been through with their brushes and combs, and any clue to the whereabouts of the missing chemist was no doubt bagged and tagged and sitting on the shelf of some dark evidence room. But amidst the dull microscopes and flasks and hot plates his eyes were drawn to a garish Russian nesting doll, smiling coquettishly from inside a Pyrex beaker.

Max lifted it out, twisted the little babushka at her equator to reveal the smaller but otherwise identical doll inside. Max’s mother always had a thing for nesting dolls. Max liked them himself–who didn’t? They posed an unanswerable question, a tickle in the brain. A complete doll demanded that you excavate all her little daughters and granddaughters. These little women, once disassembled, demanded to be put back together again, and so on. You were never finished. And the smallest doll– the size of a lean peanut, its painted face like punctuation–was always to Max a frustrating delight. Small enough, certainly, yet he always wished it could hatch still smaller generations. A woman like a grain of rice. Then another like a hangnail. Then a single peasant molecule, its atoms waiting to be split into the purely theoretical.

And so he noted with pleasure when the seventh largest of the chemist’s nesting dolls could itself be cracked to reveal an eighth the size of a newborn’s toe. And even the eighth–impossible!–had a little seam at the waist. And so did the next little grain of a doll inside. He tried to twist this one open, lost his hold, and spent the next three minutes hunting for it on the linoleum floor.

Finally he had it again, pinched tightly at both ends between his cramping fingers. He prized it apart, and the white speck inside dropped to the workbench and began immediately to flex and uncurl. It was a strip of paper, barely wider than an eyelash, yet unmistakably scribbled with tiny script. Max squinted at it for while before recalling that he was seated next to a microscope.

It took a while to coax the strip into place, still longer to figure out the microscope’s workings, but then he was reading it, a message that at a magnification of fifty appeared pockmarked and rough, but still legible:

Frowning, Max turned to see the chemist, and her gun, and the little babushka it fired.
at 7:40 PM 5 comments: