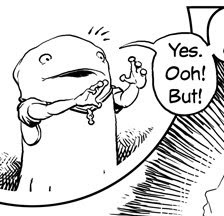 The day you probably haven't been especially waiting for has now arrived: The True Meaning of Smekday is now available in paperback.
AND!
It contains a two-page, NEVER-BEFORE-SEEN story in the back.  Now it can be told.  The tale of how J.Lo revealed his alien identity to the world.
I don't want to say too much more about it at this point, except that it contains the following image:

Hahahaha! Oh my God I want it! Will it be selling everywhere in the US? I'm not in the states persé, but you know, PR is an american territory...I guess that pretty much what goes to your libraries come to ours. Especially if it's a Borders :P

But just in case, can we get it online?

Oh, you can definitely get it online. I didn't include a link because I don't like to play favorites with the online vendor.
Hopefully it'll be widely carried by Borders and B&N and Chapters and so forth as well.

Love your inking, reminds me of the classics like Wally wood.Is this done traditionally or digitally?

Im actually pretty excited about this! I have read parts of the book standing in the stoor, but I think i will pick it up now!

BTW, my word verification for this comment is "crowses", which I do believe does not mean more than 1 crow...

I'm also actually excited about the paperback version too! Every year at the library where I work, I run a "Favoreads" program where I pick 8 books, kids read them, then they vote for their favorite. One of my requirements is that the book has to be in paperback (we buy 30+ copies of each title) and I'm so thrilled that we can use Smekday this year! I just love, love, love that book. Have I ever told you that you remind me of Douglas Adams? I miss him, but you sort of share one of his names and his kooky sense of the absurd and I just love you for that. Also, Psssst! has been voted storytime favorite every time I read it. I'm especially fond of the turkeys.

Thanks, Eric! It's digital My traditional line is a little livelier, but a lot more mistake-ridden.

And thanks for the enthusiasm, Joe, abc, and froggie. Abcgirl, I'm always honored to be mentioned in the same sentence with Douglas Adams.

Hi Adam, I really like your work and hope that this interests you and your readers.

I am attempting to amass a large collection of portraits of Frankenstein's Monster in as many different styles and in as many different media as possible as an ongoing art project. The only stipulation is that the size is 2.5 inches by 3.5 inches (standard artist trading card size) and that each card has name, date, location, title and anything else you care to add on the back.

I welcome cards from both amateur and professional artists.

I will be leaving blank cards with instructions and mailing address in galleries, colleges, art shops, on buses, handing them out in the street and wherever else I can think of.

If you think you can spare the time to produce a little something, please send a portrait to:

Each card I receive will be uploaded at http://apatchworkofflesh.blogspot.com/ to produce an on-line gallery, I then hope to put on an exhibition of these cards in a gallery.

I didn't know I was waiting for this day, and glad I was.