Pardon my language. The cover for this book, the first of a forthcoming GUYS READ Library, was a little slippery. Hard to nail down. Previously I showed you the cover we ended up with, today I show most of the ones we didn't.

Early in the process I was really attached to the idea that all of the GUYS READ anthologies might have the common element of an illicit black bar or box, possibly containing the GR logo, which could always be concealing an ostensibly naughty or terrifying or mysterious part of the image. Jon Scieszka and the good people at HarperCollins humored me for a long time about this.

Then we all glommed onto the pie in the face element for a while. 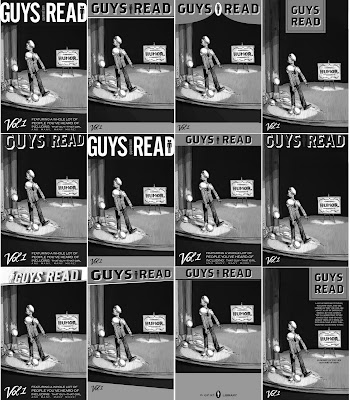 What I'm not showing you at this point is a number of formal-looking portraits of a Little Lord Fauntleroy type with pie face or, alternately, Groucho glasses. That's because eventually Harper or Jon or somebody thought it might be better to pull back from this portrait and show a modern-looking boy admiring it in a museum setting. 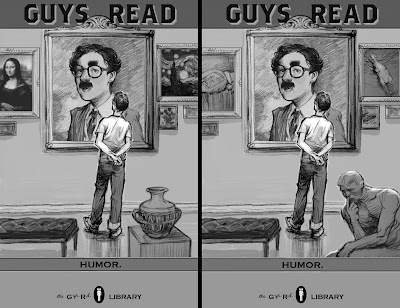 Eventually it was agreed that the gallery was working but Fauntleroy wasn't, so we explored other options.

NOT SHOWN: about a half-dozen other concepts that were too superficially similar to these to bother including.

If I sound bitter or tired that's only because I enjoy complaining. I love this book and I like its cover.
at 7:16 PM

It's great seeing your process. Funny how many iterations you end up with :]

Aw, I'm kind of partial to the pie blitzkrieg in the first round of roughs. It came out very nice in the end though, so no complaints.

Love all of those. I especially like the covered up moon, or alternatively the pooping of the GR logo. But I can see why it didn't make the cut. Hopefully you can use him somewhere else.

Thanks for sharing the covers. How frustrating to have to go through all of that work, then the end results are so cool, but I love everything you do so I might be biased?
Angela