Decided to post an excerpt for this image that I put up the other day:

The tree, possibly tired of being hacked at and pelted with stones and filled with tiny hairy people, sprang to life.  John leaped away, and Finchbriton flew free.  The tree snapped a root from the earth like a tentacle, and gave John an uppercut that he only partially managed to absorb with the chickadee shield.  He landed hard on his back, and looked up to see a spindly fist of branches swinging down at him.  He rolled and turned, just as he had done on the set of Galileo’s Revenge, and carved a few twig-fingers from the fist.  Then Finchbriton fluttered in and set the rest ablaze.

The tree pulled back, creaking and groaning, and shook itself like a dog, joggling the some twenty Hairy Men still camped in its branches.  Then it plucked one of these Hairy Men free like an apple and chucked it at John. 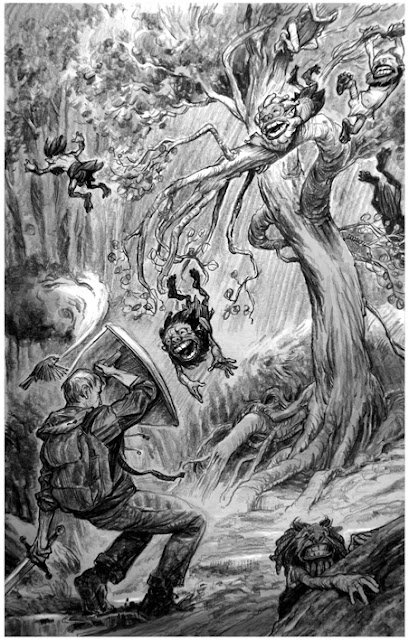 “WAAAAH!”  The brownie whanged off John’s shield and landed in a wad a few feet away, then crawled off.  After a moment the tree found another brownie and did it again.