I recently became reacquainted with my childhood best friend, Brandon, and he sent a jpeg of a painting I gave him. He says I did it when I was 13. I'm inclined to think I was maybe a little older than that, but I don't know. Anyway, here it is and, yes, it's an acrylic enlargement of the album cover of The Beatles' Abbey Road. 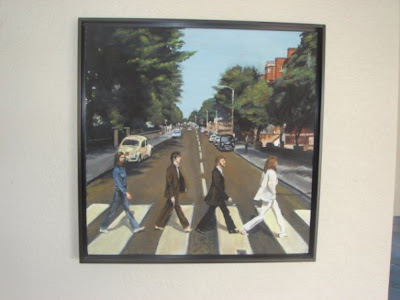 I love seeing childhood work like this, as I was famous for throwing away anything of mine that was more than a year old. If memory serves the painting is only a little larger than an LP–maybe 125-150% larger. But now that I think about it...I probably painted this from the artwork on a cassette. I didn't own any Beatles LPs when I was a kid, and it's not like I could do a Google image search back in 1986. Is that possible?
at 12:16 PM

ammmmazing. from a cassette case. those were so TEENY, adam! ") annnd you were hip cool at 13. appreciating the abbey road cover. no rick astley or um, johnny hates jazz for you. ")

Is it okay if I hate you just a little for doing a bit of awesomeness at 13 yo? You have crazy mad tech skills...

I wish I could paint that well when I was thirteen..all I could really paint realistically was insects.

It is if you're crazy talented, like you obviously are. It boggles my mind that you were able to do such an amazing job at such a young age.

I think I might indulge in a little hatin'...give me a minute.