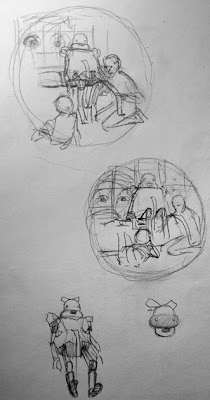 I'm due to contribute a piece of art to a group show called Idiot Box at Gallery 1988: LA. At my wife's urging I've elected to pay homage to what is arguably the worst television sitcom ever made: Small Wonder.
I lost about a week recently to a flu, so I started with a lot less in the way of thumbnails and preliminary sketches than I normally would. I gathered as much photo reference as I could of the original show, took some photos of myself, and ended up resolving a lot of the composition not in my sketchbook but on the painting surface itself: an old tabletop I found years ago in the trash and have been waiting to paint on ever since.
Here's the rough drawing. No time now, on to paint! I'll post more progress soon. 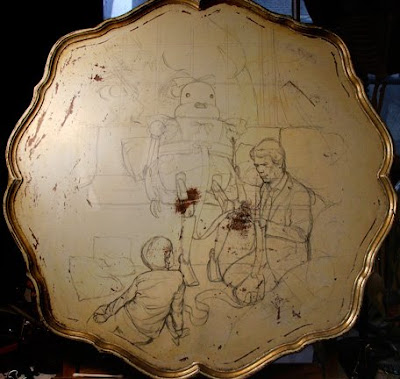 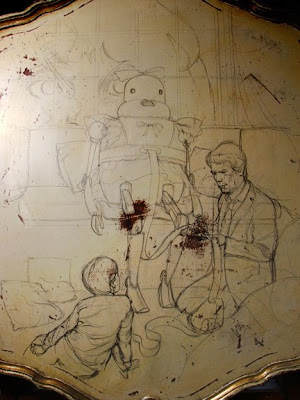 What a cool idea for a painting surface!

SMALL WONDER, eh?... okay. I trust you to make it work. I'd like to see that sitcom and see how it "holds up". That was one of those shows that even my underdeveloped, youthful mind recognized as bad. At least it had the meager appeal that robots bring -- I guess. MR. BELVEDERE certainly didn't have robots, nor did DOWN TO EARTH (though that did have ghosts). Now I'm careening madly down Crappy Sitcom Boulevard -- thanks a heap!

I love the idea that you have had an old tabletop sitting around waiting for a chance to paint on it. Can I use that excuse for lots of junk in my house?

By all means, MotherReader. Do you craft? I've noticed that crafting provides the excuse to throw literally nothing away.

I hated the show, but never missed an episode...it's shaping up to be a good painting! Her monitone, "its easy when you know...howww..." has stuck with me all these years...

HAHA- Adam, I'm in the same show and I was also torn between "Small Wonder" and the "A-Team". I should, in fact, get started on my piece fairly soon *gulp*

Hell yeah you should, Dan! Which one did you pick?

I seriously, haven't decided yet. I'm probably going to go with the easiest one considering the fact that my workload here is pretty crazy right now. I might just resort to an even simpler "Arrested Development" or "Webster" piece and I probably won't be able to start till two weeks from now.

You could make up an ad for the Corn Baller.

I was considering doing a portrait of David Cross in the Blue Man Group if all my time runs out. I really wanted to do the A-Team at a car wash but I just don't have the time.

Worst case scenario, you could just paint a canvas entirely blue and SAY it's David Cross standing in front of something.

Ooh! A blue canvas, a vertical line, glasses, mustache, and cut-offs–you can say he's standing in front of a Barnett Newman.

I'm gonna stop posting messages to you on my own blog now, it's getting unseemly. Glad to hear you're busy.