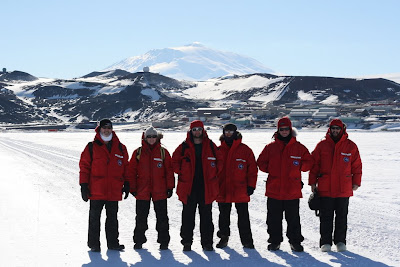 Haven't posted anything in a while. And my regular morning webcrawl tells me that today is Ada Lovelace Day–as Cory Doctorow put it, "the day that bloggers all over the world post about women in science as part of a global day of awareness and appreciation for the (often underreported) role that women play in the sciences." I love women in science (or at least one particular woman in science), and I'm a huge fan of awareness, so I'm blogging about my wife, Marie.
As I've mentioned elsewhere, she's an astrophysicist.  That's her, second from the left, in a photo by Gaelen Marsden, who I realize may not appreciate me stealing his content like this.  Let me know, Gaelen.  Anyway, Marie is here depicted in Antarctica in 2006, where she and her team built a telescope and launched it on a balloon to the edge of space to search the infrared spectrum for signs of star formation in the early universe.  She was there for two months.  Why yes, as a matter of fact she is cooler than your wife.  That's nice of you to mention it.
at 12:35 PM

..HIYEE! I just discovered your blog. lovey loves your work =0)!

Go, Marie and all you other scientific ladies! You rock!
Hmmmm, I should have posted about a woman of science today instead of a monkey and a dancer...
Note to self: check news on the web B4 posting blog!

Our youngest daughter is named Ada, and I had it in my head we were naming her for the Cold Mountain character (great novel), and it turns out my husband had Ada Lovelace in his head. Neat, either way.

Hey, I stopped by, 'cause on Sunday I'm going to post some poems from some poets (go figure -- I'm not at my most articulate today, am I?) in honor Poetry Month -- to kinda kick it off. Sorta a teeeeeny version on Sunday of what Greg K. is doing all month. And I have Julie Paschkis art, but I was wondering if you, Adam Rex, one of my favorite poets and illustrators, happens to have any art that would be appropriate for that day. Anything about poetry? I want to show more art than just one image, though Julie's is LOVELY and I lurv it.

Let me know if you have any ideers, as in any art that would work for that day that would be easy for you to send, if you're willing.

Hmm. Can't think of art that's specifically poetic–I'll have to think about it, Jules. Ooh–how about these?

Pictures of my wife as the dawn and as the North Star. You can crop them so just the full composition is showing, without the details.

I actually did my senior thesis on "Women Who Shaped Our Modern World" and Ada was one of the women I featured. http://kmillustration.blogspot.com/2009/05/senior-thesis.html