Show and Tell Me 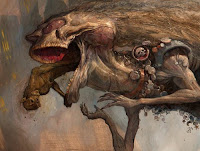 Please click through to Amy Timberlake's blog Show and Tell Me to read the story (and see a larger image) of this terrible thing to the right. But suffice it to say that yes, it is a picture of a zombie throwing up a smaller zombie.
at 5:55 PM 3 comments:

A Short Play by Adam Rex
Based on True Events

A hall in San Diego. An attractive woman dress'd and undress'd in the guise of slave Leia poses for photographs. Three rogues look on.
ROGUE ONE: Not hot, methinks this counterfeit of Princess Leia be.
ROGUE TWO: Forsooth, my friend speaks verily: not so hot is she.
ROGUE THREE: FAIL.
Rogues Exeunt.
FIN
at 7:47 PM No comments: 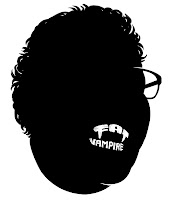 Previously I mentioned I'll be participating on a panel at Comic-Con. I just want to say today that I'll also be signing in the Autograph Area after my panel, and giving away FAT VAMPIRE t-shirts to the first fifteen people in my line (who want one).

Just a quick note to say that I'll be at the San Diego Comic-Con in support of my new book, FAT VAMPIRE.

I'll also just be wandering around most of Saturday and Sunday, so if you see me please say hi. I'll be the guy who looks like me.
at 3:10 PM 2 comments:

Okay, it seems I owe some of you an apology.

Ever since Adam died I’ve been insisting that he absolutely is NOT one of the legion of the undead, but then he stopped by last night and sort of broke it to his mother and me. It’s not a choice he made, it’s just who he is now. I think we’ll get used to it, in time.

And I guess he really has written a vampire book. He gave us a copy, which he insisted we begin reading immediately while he watched us with those smoldering eyes of his. I like it all right, but it’s not really his mother’s cup of tea.

Maybe you people will like it better. Here's an excerpt.
at 3:22 PM 2 comments:

Adam’s mom wants me to take down that last post, but I can’t figure out how. She wants everyone to know that her son was very successful. Maybe not as successful as he would have been had he followed his father into engineering–ask me how many homicidal goth copyeditors have visited me lately at Honeywell–but I guess that’s water under the bridge.

Heh. Water under the bridge. You know some legends say vampires can’t cross water? I read it on Wikipedia. A little dead son vampire humor, there.

Adam's Dad Again, and This is the Last Time.

You people. You people with your sick rumors. For the last time:

Adam has NOT returned from the dead to shop around a new vampire novel. I don’t even know where to begin telling you what’s wrong with that idea. To start with Adam simply would not write a vampire story–it’s not his style. And with the YA and Adult market already oversaturated with other people’s vampire stories? It would be ridiculous.

Please show some respect for the dead.

We’ve heard about the book too, but I’m sure it’s just by another author with the same name, or else some sicko trying to cash in on our boy’s death. The joke’s on you, mister sicko. None of Adam’s books ever made any money.
at 1:27 PM 1 comment:

I’d like to say right off the bat that Adam’s mother and I don’t appreciate all the rumors flying around the internet about Adam being killed in some supernatural way. I’m a man of science and I don’t believe in such things.

Yes, he was found in his car yesterday, nude and completely exsanguinated. On his chest there was a message in blood that read “YOU USE TOO MANY COMMAS,” so of course police are looking for that copyeditor gal.

I thank all of you who posted thoughtful emails and comments. To the rest of you I say: knock it off with all your “advice.” We are not going to cut Adam’s head off and fill the mouth with holy wafers. We’re Presbyterian.
at 2:10 PM 3 comments:

If you read this blog then you’re probably already aware of some of the stories getting around about him, but I want to set the record straight.

Adam was last seen at the Phoenix Book Festival in the company of what I’m told was “a fair-skinned and darkly beautiful young copyeditor.” She approached him after his signing and professed to be a big fan and brushed her slender hand against his. Phoenix in July is pretty warm, and Adam was heard to whisper that he could not account for the fractal chill that spread in his breast.

He’s always talking like that–you should have heard him when he was a teenager.

According to eyewitnesses he walked off with the beautiful copyeditor after she remarked that she wanted to share with him her “dark embrace.”

“Ha!” he was heard to say as they left. “For a moment I thought you said your ‘dork embrace.’ Huh…that would be a funny premise for a book.”

He hasn’t been seen since.

If anyone has any information, we’d appreciate it. He was supposed to come over last night for Jenga.
at 1:46 PM No comments:

The Queen of the Quail 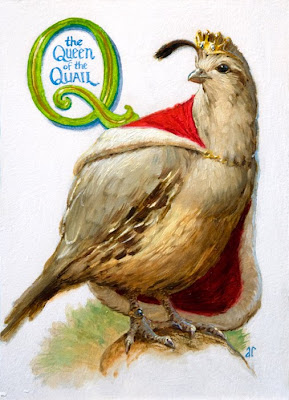 Baby gift for my friends Phil and Angie, and brand new friend Phinneas. 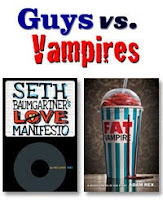 If you're a member of the online teen writer community Inkpop, or know someone who is: I'll be having a live chat there Wednesday, July 7th, at 5pm eastern time. HERE'S THE LINK
at 11:09 PM No comments: