If There Isn't, I Want to Nominate "Dissynonym."

I've been curious lately if there's an official term for a word which, colloquially, is used to mean the exact opposite of what it actually means. And I'm not referring to intentionally ironic slang, like the way people used to say "bad" to mean "good." I'm more interested in cases where the speaker is likely not even aware of what they're doing, as with the word "literally," say. In fact, I could include just about any word or phrase which is intended to assert the veracity of something but which, in informal usage, doesn't. As in the example below:

I swear*, this burrito last night was literally** like a hundred pounds. Seriously***, it would have taken fifty people to finish it, I shit you not****.

*I don't swear.
**figuratively
***Not seriously
****I totally shit you. Figuratively.
I don't normally like to swear on my blog, but if any young kid made it past the phrase "intended to assert the veracity," he's earned it.
So does anyone know if there's a term for this? Can anyone think of other examples?
**UPDATE** CONTRONYM! A word which is its own antonym. Apparently "literally" may just be on its way to becoming a solid contronym. Like "cleave," which can mean both "cling to" or "split."
I love that I know this word now. Thanks, internet! Specifically, thanks Aaron Zenz, who pointed me toward a great Slate article. An article which points out that while I'm bugged by this use of "literally," I've been ignoring the same misuse of "really."
at 6:35 PM 12 comments:

I know I mentioned all this before, but I just learned that a collection to which I contributed called Manners Mash-Up is officially on sale today. This book also features Bob Shea, Sophie Blackall, Dan Santat, Henry Cole, and many others. Kirkus says it's "Good advice waggishly packaged and not completely tasteful—a winner." 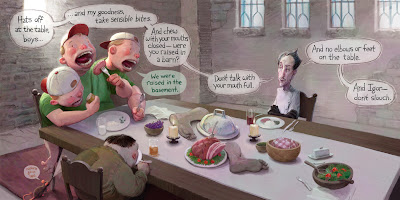 You know, I don't think I follow any of these commandments except the ones about feet and napkins. It's like my mother didn't raise me right. But I know that could not possibly be the case, because my mother is classy and beautiful and reads my blog.
at 11:50 AM 2 comments:

A day or two ago you may have seen this feature of mine in your local paper: 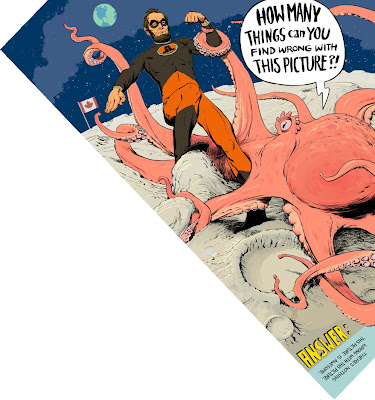 Click to make it bigger.
It was only one oddly-shaped piece of this week's installment of The Goods, a bounty of games, comics, puzzles and more that's distributed by McSweeney's and Tribune Media. Upcoming contributors will include Carson Ellis, Laurie Keller, Jon Klassen, Sean Qualls, Jon Scieszka, Bob Shea, Lane Smith, Dan Santat, and Mo Willems.
UPDATE: Fellow President's Day contributor Brian Biggs just posted his maze over at his site. Go look at it! It's hair-raising! You'll understand why it's hair-raising if you go look at it.
Not getting The Goods in your paper?
Oh my gosh I'm so sorry.
Well, maybe write to your paper's features editor, then, and request it. You can direct him or her to this link.
at 6:49 PM 14 comments:

For Her Birthday My Friend Wants Two Libraries.

My old high school friend Stephanie is about to turn 38 (Which I suppose means I am, too. Shoot.), and she's doing something really excellent. She'd like to raise 700 dollars in 7 days–which is apparently just enough to establish two libraries in rural schools in Guatemala, where Stephanie was in the Peace Corps. She's doing this through her late mother's charity, Books for a Better World, and I'm going to help. I thought some of you people might like to help, too.
To earmark your donation, please add 38 cents to the dollar amount. Make it $5.38, $20.38, whatever. I'll have her report back in a week to tell us how much she raised.
I know you have a lot of people asking for your money, but can I just reiterate: for her birthday Stephanie wants two Guatemalan libraries. Isn't this exactly the sort of person we want to encourage?
at 11:17 PM 4 comments: 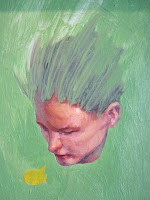 New show opening tomorrow night at Lulubell Toy Bodega. More than 20 artists, and all artwork is to be 7 inches by 7 inches or less. I'll have three very affordable paintings in the show. David Christiana will have something like eight pieces. Phil Hilliker painted on Scrabble tiles. You should probably go. Click this for info, and make sure to click "next" in order to see some samples from the show.
This green girl is a detail from one of mine. Her head is maybe an inch and a half across.
at 3:13 PM 2 comments:

Yesterday morning I awoke to find I had an email from someone about my Teen/Adult novel, Fat Vampire. People email me all the time. Sometimes they write to say they like my books. Sometimes they even write to say that they like my other books, but that they didn't like this one or that. I have a policy about not reading reviews, but it's hard to stick to your guns when reviews are coming straight into your inbox like that. But yesterday's letter was different.
I'm not going to print it, because a person who emails me should not have to expect that his private message is going to be published on even this tiny public forum. But I'll summarize: Fat Vampire is smut. The emailer went to his daughter's principal and convinced her to remove it from the school library. He promised to tell everyone about Fat Vampire and requested, in the future, that I please keep my books out of schools.
The following was my response. I have not yet heard back.
I regret that you were offended, [Name Redacted]. And in monitoring your daughter's reading and requesting that she refrain from books you don't find appropriate you were doing exactly what all parents should do, if they're able. You'll understand if I don't agree with censorship, however. The other parents at your daughter's school also have the right (some would say responsibility) to regulate their kids' reading, and you've taken that right away from them.
I think you're mistaken about my role in all this. I didn't put my book in your school, nor do I decide where they're sold. I merely wrote a story I wanted to write, and was grateful that my publisher published it. Ultimately my publisher is the entity that decides how my book will be marketed, as well, and with thousands of Young Adult titles to their name they decided that my book, too, is a Young Adult title. Mind you, I'm not saying I disagree, though I tend to describe it as a Teen/Adult title myself (which essentially amounts to the same thing). Regardless, I don't put my books in your or any other school, so I can't be entreated to keep them out. You could only ask me to stop writing, and to that the answer's no.
I don't envy you your task these next few years–you're going to have to be very vigilant. If you consider my book to be smut then you'll find that there are a great many Young Adult titles that are just as bad, and a fair number that are worse. Anyway, though I don't like book-banning I defend your right to tell anyone and everyone you know just exactly how you feel. You may want to temper your enthusiasm, however, with the knowledge that it's a rare censorship campaign that doesn't increase a book's sales.
Sincerely,
Adam Rex
at 12:32 PM 41 comments: