Things are going to be pretty dead around here for the next few weeks, but before I leave I wanted to post about something that arrived on my doorstep today–my contributor's copy of the San Francisco Panorama. It's a one-time-only newspaper that was sold on the streets of SF a few days ago. But it's also issue 33 of the McSweeney's Quarterly, and as such it will also be sold for sixteen dollars in bookstores nationwide and through the McSweeney's Store.

This thing is a packed, Sunday-sized newspaper with original reporting, fiction by George Saunders and Roddy Doyle, Stephen King on sports, David Chang on ramen, comics by Chris Ware, Daniel Clowes, Adrian Tomine, Art Spiegelman, and many more--and a children's games page, called the Rear End, edited by my friend Mac Barnett. He asked some of his favorite writers and illustrators to contribute--Jon Scieszka, Carson Ellis, Jon Klassen, Kevin Cornell, Jenny Traig, and Jon Adams--and he and I co-created our own feature called HOW TO SNEAK. So here's that. Click to enlarge: 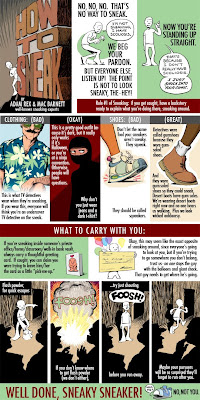 Happy Holiday! Will come back to resume reading your blog in 2010 then :D

We will miss you. And you get adorable fan points for showing us the piece you did. :D

So sneaky! Very cool! See you next year!