This just in: My Artwork is Still Fine.

From the Kirkus review of IT HAPPENED ON A TRAIN:

Kid gumshoe Steve Brixton (who actually doesn’t have a brother, he just picked the name because it mirrors his beloved Bailey Brothers detective stories) has, at the ripe old age of 12, retired from the detecting game. He became disenchanted upon discovering, during his last adventure (Ghostwriter Secret, 2010), that the author of those inspiring books was actually a criminal mastermind. So Steve’s given up his agency, and now his best chum Dana is spending entirely too much time with Other Dana, his girlfriend. Little does Steve know that signing up for the Model U.N. with Dana and Other Dana will place him on a train rocketing toward detecting destiny! When meeting a mysterious young lady onboard gets Steve invited into the mysterious last car on the Sunset Coastliner, Steve and Dana (but not Other Dana) find themselves invited to protect Mr. Vanderdraak’s new, vintage motor car from serial car thieves! Can Steve solve the case? More importantly, can he go more than five minutes without getting trapped somewhere? Barnett’s sly and often silly Hardy Boy parody chugs along with plenty of laughs and enough honest-to-gosh mystery to please any lover of boy detective fiction. Rex’s black-and-white pencils (which also parody the Hardy tales) are still a fine match for the goofiness.

Here's one of those "pencils" which continues to be perfectly adequate: 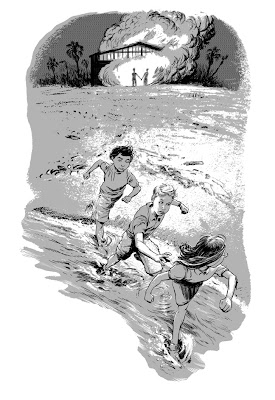 This is actually, of course, a pretty nice review from a notoriously demanding publication. Happiness just isn't as much fun to blog about.

But where do you get the crazy white pencils? I can't wait to read this one and glance briefly at the illustrations.

Congratulations on being "a fine match to the goofiness."

In Kirkus speak, “still fine” means “continues to knock the socks off of.”

If a book has “Mac Barnett” or “Adam Rex” on the cover, I’ve got to have it. Both names on the cover? Entering Big Bang territory. I’ve been looking forward to the next Brixton Brother book since I got halfway through the last one.

Are those magic pencils? Awesome work, as usual, Adam!

Heck, these are more than acceptable, they're adequately satisfactory!