I craved little gold stars when I was a kid, and apparently not much has changed. Kirkus reviews recently gave a starred review to my next novel, Cold Cereal (coming Feb. 7th), and if they saw fit to send me an actual star in the mail I'd stick it right on my Trapper Keeper. 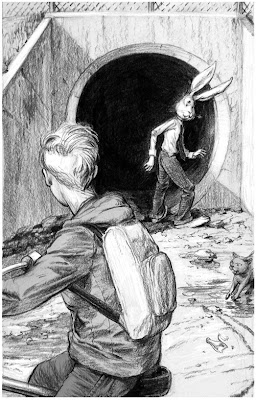 The author tucks in portrait illustrations and hilariously odd TV-commercial storyboards, along with a hooded Secret Society, figures from Arthurian legend, magical spells and potions, a certain amount of violence, many wonderful throwaway lines (“Yeh may have a tarnished glamour about yeh, sure. Like a celebrity’s daughter.”) and tests of character with often surprising outcomes.

I think their classification of the pictures in Cold Cereal as "portrait illustrations" may have something to do with the character of those few images that were actually on display in the Advance Reader Edition. I'm afraid most of the illustrations were missing then. But I got the picture above done in time to include it. From the book:

And, by way of signing off, here's a picture of two men dressed as a unicorn. 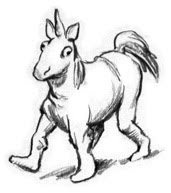 Did you don a rabbit head before creating your illustration? :)
Can't wait for the book!

I cannot wait to read this. You're my friend and all, but you're also one of the funniest writers around. That rabbit head sentence is not an easy thing to pull off.

P.s. Happy Thanksgiving to you and Marie!

Those stars are bound to multiply like rabbits, I'm sure. Congrats!
- AZ

Thanks, everyone! And congratulations, Matt, on the movie deal! Marti Noxon is awesome.