Finally they reached Manhattan, and then the Port Authority Bus Terminal, and then a spot outside some Port Authority restrooms, where Ms. Egami asked if anyone had to go and Scott raised his hand so energetically he heard his back crack.

He rushed into a narrow stall and was punched in the nose by the smell. The toilet showed signs of having been visited by either a very large man or a very small horse, but Scott didn’t feel he had the time to be picky. He spun out enough toilet paper to vandalize a house and carefully cleaned the seat.

Dizzy, he nearly dropped his backpack to the floor, then got a closer look at the floor. Instead he looped it over a hook on the stall door and then a great vinegar wave crashed over him and his knees gave and he gripped the seat and sputtered his breakfast into the bowl.

A minute later he flushed and turned.

Afterward, he’d realize he didn’t think about it at all—when he saw the hand appear over the top of the door and reach for his bag, Scott lunged forward and seized it at the wrist. The tiny wrist, attached to the tiny hand on an arm like a doll’s. A real ugly doll made from dried fruit and old footballs.

The hand squirmed. Scott looked down beneath the stall door for the thief’s feet. There were no feet. Scott considered his options, and so did the thief.

“Well now, son,” said the thief in a voice that was both high and coarse, like a kazoo. There was something a little foreign about it too. Australian, maybe, or Irish? “It seems you’ve got me. So wha’ d’yeh suppose you’ll do with me?”

Still holding the tiny wrist, Scott unlatched the door and opened it just enough to poke his head around. It was a tiny man, this man who was trying to take Scott’s bag. He couldn’t have been more than two feet tall, with a miniature red tracksuit and his arm hooked over the top of the stall door. His tiny old-man face was pug nosed and underbitten like some overbred kind of dog, and it seemed puckered with sadness. Not to mention oddly familiar. If it wasn’t for this familiarity, and for the feel of the man’s arm in his hand, Scott would have mistaken him for another aura.

“Yeh don’ happen to have somethin’ to eat, do yeh, lad?” the little man asked. “I’d be in your debt. ’Tis always a blessing to have one o’ the Good Folk in your debt.”

Scott glanced around the restroom. Men and boys were coming and going, but none were paying any attention to what he considered to be a fairly unusual tiny-man-hanging-on-a-toilet-door situation. That’s New Yorkers for you, he supposed.

“Except when it’s not a blessing, yeh know,” the thief continued. “Speakin’ fair, the blessings o’ the Good Folk can be worse than the curses.”

“You could have just asked in the first place,” Scott muttered. “You didn’t have to try and steal my bag.”

“Asking is begging. Pitiful. Want to punch myself in the eye for even tryin’ it. Stealin’ is good, honest work,” said the thief, puffing out his chest.

“Well, not honest, strictly speaking,” he admitted, after a moment. “Or actually good.”

They were interrupted by Denton Peters, who barged through the men’s room door, shouting Scott’s name like it was a swear word.

“Ms. Egami wants to know what’s taking so long,” said Denton. “You got the squirts? Should I tell her you have a bad case of the squirts?”

“Need yeh to let me go now, son,” the thief said to Scott.

Denton frowned in the little man’s general direction, and then Scott thought he saw a flash of recognition on the boy’s face. He’d seen something. Denton Peters squinted, titled his head, crossed his eyes like he was trying to cope with an optical illusion.

What Denton Peters saw next was a sort of prismatic blur, and then Scott jerked back his arm, yelping with pain. Scott pushed past him and scowled into the distance.

Denton followed his gaze to the men’s room door.

Scott unhooked his backpack. “Your mirage bit my hand.”

Oh Huck! seemed like kind of a lousy musical, but Scott supposed he might have been in the wrong mood.

His migraine vanished shortly after leaving the bus terminal, but on the way to the theater Denton staunchly denied having seen anything unusual in the men’s room apart from the new kid hiding from imaginary elves. Denton had by this time already forgotten Scott’s name, however, and most of the other kids didn’t know who he was talking about, and Scott had hidden behind Carla Owens until it all blew over.

Scott was quiet as they returned to the bus terminal through the toy store dazzle of Times Square.

“I just don’t think they should have made the raft a separate character,” said Emily.

“Riff-Raft?” said Erno. “But she’s the narrator. She told you what was going on.”

“Mark Twain didn’t need a talking raft in the book. Or a rapping scarecrow.”

“Scott, tell my sister that everything doesn’t have to be exactly like the precious book.”

“You’re still upset,” Emily told him. “About Denton teasing you.”

“Forget about it,” said Erno. “Everyone else has.”

The thing is, they probably had. Scott was nothing if not forgettable.

Back at the Port Authority there was some sort of situation. Two flashing police cruisers were up on the sidewalk in front of the entrance, grille to grille. A crowd had formed, and three uniformed officers attempted to push back these people with outstretched arms and patently false claims that there was nothing to see. Another officer, on horseback, paced the street. And in the center of it all, two more policemen squared off against each other like big dogs.

“Let’s not do this here, man,” one of these officers was saying in soothing tones. “We can talk about it at the station.”

The other man took a step back, took a step forward, his boyish face tangled with fear and anger. “We’ll go back to the station when you admit I’ve apprehended a suspect!” he said, pointing to the backseat of one of the cop cars. “This is not cool, guys! I know I’m the rookie and all, but—”

“Not in front of the juveniles,” said the first officer, glancing at Scott’s class.

An electronic red news crawl on an adjoining building declared the dow down and reggie dwight punches queen and then police disruption at port authority bus terminal. It flashed like a marquee for the weird bit of drama playing out in front of them.

Scott craned his neck to look at the rookie’s car. There was someone in the backseat, but the suspect was very small. Smaller than a toddler. He wondered. . . .

If Scott Doe had a talent, it was his ability to walk about unnoticed. When not actually calling attention to himself in bus station bathrooms or by defending his indefensible given name, he was one of those kids who could practically disappear in a crowded room. Inconspicuous. Unremarkable. It had always been that way.

So now when Scott shuffled away from his class and approached the police car, Ms. Egami did not notice. Even Erno and Emily didn’t notice, transfixed as they were by the police and the strobing lights. Scott stepped up to the cruiser on the street side, away from the cops, and looked in the rear window.

It was the little man again. He was slumped in the backseat, his round fists ringed by silver handcuffs like tiny planets. He could have just slipped them free if he wanted to. Apparently he didn’t want to.

“Look, Pete . . . ,” the cop was telling the rookie. “We need to get you some help. There is no one in back of your squad car. There is nothing but a pair of empty cuffs.”

“Fight!” Denton Peters suggested from the sideline, and Ms. Egami tried to shush him. “Shoot something!”

The window was open a crack. The little man sniffed and looked up at Scott.

“I can see you,” Scott said quietly into the gap, “and that policeman can see you, but nobody else can.”

“You’re a regular Sherlock Holmes, yeh are. Quick now an’ offer your services to those coppers! They could use a brilliant mind like yours.”

“Why can I see you? Am I crazy?” Scott asked, worried suddenly that his headaches were the sign of something else, something festering in his brain.

The little man studied him for a second. “Set me free, and I’ll explain everythin’.”

Scott looked again at the handcuffs, so large against the man’s wrists that they looked like a practical joke. “Why can’t you—”

“Were you stealing again? Is that what happened?”

Scott breathed, and tested the door. He expected a police car to be locked, but it wasn’t.

“Hey,” one of the police officers said just then. “Hey, your door is open.”

Scott ducked down, and the little man scootched to the edge of the car seat, rattling his handcuffs.

Scott pulled them off, easy as anything. And that’s when the little man leaped up onto his shoulder, ran down the length of his back, and was away.

The small red tracksuit slipped into the street, dodging traffic. Then the clop of hooves, and the mounted policeman was towering over Scott, her horse snorting thick, furious clouds.

The officer was shouting. Scott cowered. It might have gone badly for him had the horse not chosen just then to turn into a unicorn, and throw its rider, and turn back into a horse again. 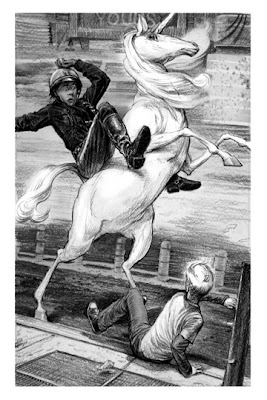 The policewoman landed on the pavement, hard. Scott ducked and dashed back to meet his class as the other officers rushed to her aid.

“There you are,” said Erno when Scott turned up beside him, panting. “Did you see that horse rear back like that?”

“I’m having kind of a weird day,” said Scott.

I need a second bowl. Pass the milk.

Nicely done! It captured my interest and I want to read more. MORE I TELL YOU!!! Sorry... Lost my head. Books can do that to me. Please sir, may I another?

Well, what can I say--I'm exhausted after a very long day and just clicked on your site by chance--but I'm thoroughly charmed by this piece and read it straight through. Cinématic. Keep going. Love the Irish tone.

Just finished reading the ARC. Fantastic! Can't wait to see the book with all the illustrations. Must know - what is the WHOOP noise??? Guess I'll have to wait a year or so to find out...

It's the sword, Tanya! I guess I should have made it more obvious.