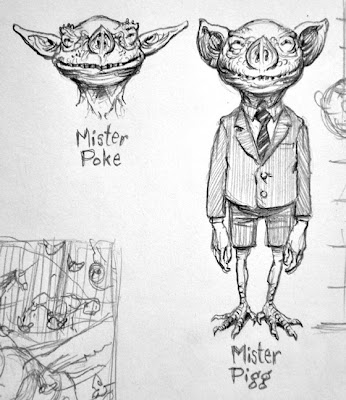 A couple minor characters from my next novel, which is written but not illustrated yet. It'll be the first volume of a new middle-grade trilogy (by which I mean it's for middle-grade readers, not that it's a mediocre, utility-grade trilogy), and will be in stores some time in the winter.

These guys are goblins, and are described in the manuscript thusly:

They were each perhaps just a half-foot taller than Mick, with milky-white bodies but startling red faces. Red as if they’d been dipped to their chins in blood and the stuff had dripped some foreign alphabet all over their necks and collars. From top to bottom they had: bald pates, all the worst features of both toad and bat, little wool grey suit jackets with ties, short pants, and chicken feet.

Well I'll tell ya, you've certainly got it all down right, except Angus Young also often wears a matching cap for his school boy outfit.

Looks awesome, bat-noses are the best :)

It is simply charming, ugly and beautiful at the same time.

I love the ill-fitting suit.