It Continued to Happen on a Train

Yesterday I shared some of the sketches and steps–the station-stops, if you will–needed to arrive at Successful Book Cover Terminal. Previously I mentioned that we'd gotten to a pretty good place with the sketches, but certain people were uncomfortable with A) showing a knife on the cover and B) showing a boy in a towel on the cover. 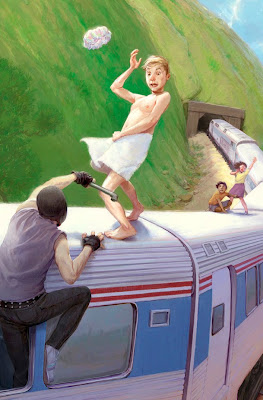 So the knife became a lead pipe (which, if also rejected, would have been replaced with a candlestick or some business), and then I made the towel a robe: 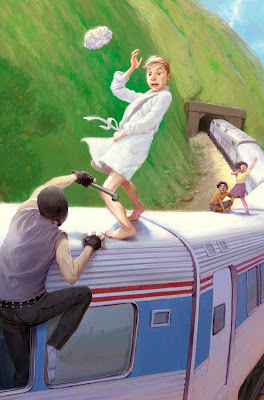 Which everyone liked, but now they were disturbed by the placement of Steve's hand. 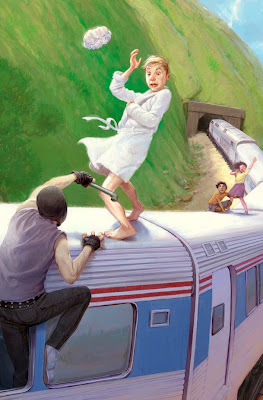 There, now. We have arrived at Successful Book Cover Terminal. All passengers must exit.
at 2:12 PM

A girl would hold a robe closed in that new position...but a boy wouldn't. It's windy on top of a train!

Awesome illo! Yes, with the towel, I couldn't stop thinking how awkward (and cold) that poor kid would be. Def like the robe!

Jeebus! Might as well replace the pipe with a peace sign, and put the kid in a muumuu. But the robe is cool, it adds character, don't know how but it does.
(Don't show those people The Dirty Cowboy, they may cancel your service.)

Looks like you also had to lengthen the robe a bit more too. Steve can't show too much leg!

THanks for the breakdown. I always enjoy seeing these types of process dissections.

On a final note, the last two images together would make a funny animated gif.

If a dude was pouncing up from beneath my legs, wildly swinging a metal pipe, undoubtedly basic creature instinct would kick in overdrive and the placement of my hands would be strategically relocated to protect the nuggets, even if unconsciously disguised as keeping my robe from exposing them to the would be nugget abuser below. Even a schoolboy would. Let there be nugget protection on the cover!

Masked goon:- 'I've fixed the problem with your shower Mister, it was this dodgy bit of piping.'

If I may Adam, how long did it take you to complete the finished image? How much was traditional and how much, if any, was digitally done? Thanks!

I don't remember, WilsonW. Close to a week? From the approval of the sketch to the finished painting? I'm just guessing, but that would be typical.

The sketches were all rendered traditionally, graphite in sketchbook, but the painting is 100% digital. Wacom and Photoshop CS3.

Wow! Thanks for the info Adam. I'm always trying to find ways to speed myself up and you set a new high for what can be accomplished digitally. Executed masterfully as always Sir!

I know at one point you sold your originals online. Is there still somewhere that that can be done?

I don't have a broker anymore, so if you're interested in anything I'm afraid you'll have to just contact me about it.

Adam, When will the book be available to buy?