There Are Pigeons Nesting in My Pigeon Spikes. 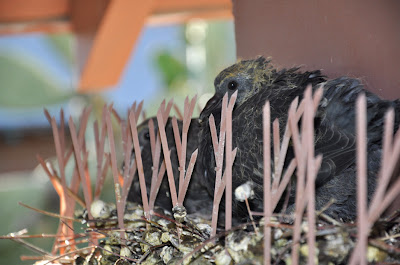 And I actually like pigeons. Longtime readers of my blog will remember how delighted I was to discover that first nest of them on my porch. I even asked you to name the babies.

But nest after nest of chicks convinced me that this was not some rare and fragile miracle. This was not Pale Male nesting on Fifth Avenue. My porch was more like an especially unsanitary inner city maternity ward.

Unsanitary because I've learned, and I don't think there's a delicate way to phrase this, that pigeons produce an astonishing amount of waste. They'd turned the columns flanking my house into two abstract expressionist monoliths, like exactly the sort of crapcentric art installations that make Republicans want to defund the NEA.

So, pigeon spikes. And now pigeons nesting in what was apparently not the appropriate amount of pigeon spikes. Those chicks above were fledged a couple weeks ago, so I went up the ladder to install stronger defenses. But they'd already rebuilt the nest. And the mother in it would not leave. I didn't take this with any kind of zoom. I was this close. 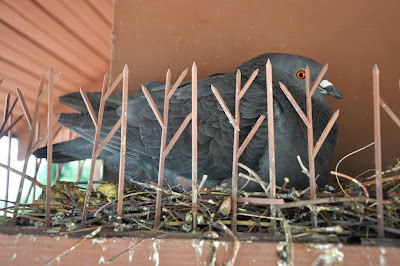 Eventually I was too close, and the pigeon lunged at the brush I'd brought to clear away the twigs and droppings. So for a moment I could see that she'd been hiding two new and dandelion-yellow chicks.

Email ThisBlogThis!Share to TwitterShare to FacebookShare to Pinterest
Labels: pigeon nesting on my porch

It's really not all that monochrome, Peter. And that's all I want to say about that.

Hi Adam! I often lurk and not comment (we lurkers are like that), but I had to tell you that when I read your blog title I envisioned an Avian Vlad the Impaler. Glad to know this is not the case, and instead you've constructed a lovely little fence for your pigeons. ;) Pam

I think the word is "craptastic."

Yoborobo–I intended to slip in some mention of putting little clay pigeon heads atop the spikes as a warning, then forgot.

Adam, if I didn't already love you before, your bird-ventures have sealed it. You're stuck with me. I think I love Marie too because obviously she must feel the same way about the birds.

What if you installed a gargoyle there, after this brood fledges, that is.

Aw, thanks Angela. I am thinking of getting one of those plastic owls.

Adam, you should just let her sleep in your room. Provide a cat litter box to teach her hygiene. If the relationship didn't blossom you could get a Sicilian cat.

I've always wanted to know what pigeon babies look like--I have NEVER seen one in New York. Yellow, you say? Are they...cute?

As cute as any baby bird. Which is to say not very.

Clear, concise and easy to read. Thanks for a nice blog post!

Thanks for sharing this information. pigeon is also my favorite bird and you provided me some great information about pigeons.

Get Rid Of Birds

your information is nice but When installing Bird Spikes,the spike’s width should leave no more than a 1-inch gap on either side. To attach the spike, use glue, screws or tie-down straps. To install the spikes on pipes and conduits, use common hose clamps, nylon ties or wire lashings.