It Happened on a Train

I don't make a habit of illustrating books I haven't read. But it's happened a few times, typically in cases where the cover was needed before the book itself was actually written. The forthcoming Brixton Brothers #3: It Happened on a Train was such a book. Mac Barnett was getting a late start writing it–he had the mystery mapped out but not a lot in the way of action set-pieces, so he and I talked on the phone about what could conceivably go on the cover.

Of course there had to be a foot chase on top of the moving train at some point. But this alone wouldn't convey the slightly off-center atmosphere that all the BB books have, and which I like the covers to reflect. I asked Mac if it would be possible for main character Steve Brixton to be wearing a bath towel. If memory serves, I was sort of kidding.

"Actually," said Mac, "I think I could make that work." 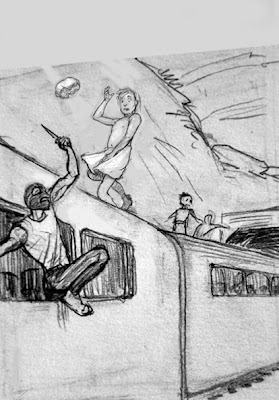 I think you should read the book, so I'm only going to say that it makes perfect sense in context. But the above cover sketch isn't very good. I struggled early on with how to show both the train and the action in an engaging way. I could pull back and show more of the train, but then the action would suffer for lack of tension. I could close in on the action, but then everyone might look like they're fighting atop a Tuff Shed. 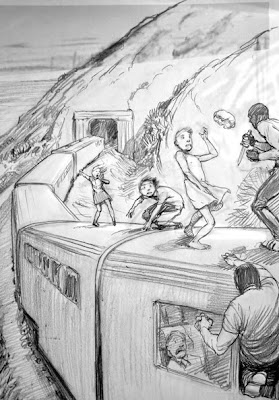 Ooh, better. But at this point Mac let me know that there could only be just the one masked goon. 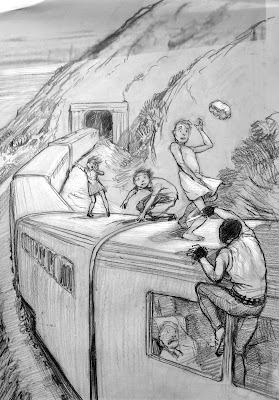 And that he needed to be left-handed. 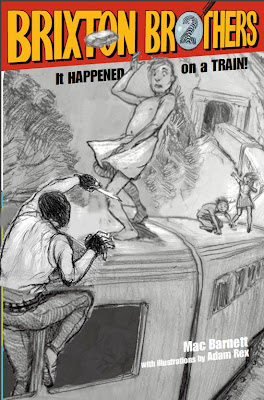 And this image-flopping killed two birds, actually, since the train needed to be shown traveling south down the California coast. So now everything was perfect, except that the publisher decided that they couldn't show a knife on the cover, and also that Steve in a bath towel was stirring up some...confusing feelings.

TOMORROW: The finished cover.
at 2:41 PM

Just tell Mac that if he is a good enough writer, he should be able to work with whatever you want to draw. Then say, "That's how Hemingway did it. So I've heard."

Funny you mention it. Mac used to do a lot of improv, and he recently told me:

I think this inversion of the author/illustrator process is actually not any more ridiculous than the way it's usually done: when you illustrate my manuscripts, you're responsible for so much of the narrative, but are also hemmed in by certain choices I've made. When I would improvise scenes, I would love it when an actor made a strong and weird choice--justifying a strange setting or odd last name became a narrative engine that propelled the whole scene, and I kind of feel like that's what happened here.

I can see the benefit of that. Instead of starting with a daunting BLANK page, you have a little kernel of something to find a finger-hold with. Who knows where it will lead?

I always look forward to Rex/Barnett collaborations!
Looking forward to seeing the changes in the final cover.

YAY another Brixton Brothers!!! I just read the first two this past week! Lots of fun! Thanks so much Adam for showing us your process!

My pleasure, WilsonW! Thanks for reading them.